Uncategorized Battle of the Somme

Battle of the Somme 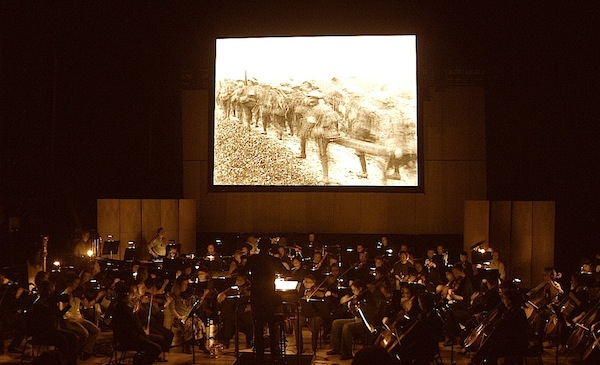 In 2006, The Imperial War Museum commissioned Laura Rossi to score a film for the 90th anniversary of the Battle of the Somme. During 2016-17, the music, together with the film are being shown and performed at various venues around the country.

The Birmingham Philharmonic Orchestra will be taking part in a performance at Walsall Town Hall on Saturday 15 July at 19:30. The building is an appropriate venue, as it contains two large paintings by Frank Salisbury “to commemorate the never to be forgotten valor of the South Staffordshire Regiments in the Great War 1914 – 1918”.  The film contains footage of real wartime events compiled into a feature-length documentary, now digitally restored and with the music performed live as the film is screened. Members of your family may well have served in the Great War – come and see for yourself how it unfolded for them.

Tickets (£10) are available from priorbooking.com.

This website uses cookies to improve your experience while you navigate through the website. Out of these cookies, the cookies that are categorized as necessary are stored on your browser as they are essential for the working of basic functionalities of the website. We also use third-party cookies that help us analyze and understand how you use this website. These cookies will be stored in your browser only with your consent. You also have the option to opt-out of these cookies. But opting out of some of these cookies may have an effect on your browsing experience.
Necessary Always Enabled
Necessary cookies are absolutely essential for the website to function properly. This category only includes cookies that ensures basic functionalities and security features of the website. These cookies do not store any personal information.
Non-necessary
Any cookies that may not be particularly necessary for the website to function and is used specifically to collect user personal data via analytics, ads, other embedded contents are termed as non-necessary cookies. It is mandatory to procure user consent prior to running these cookies on your website.
SAVE & ACCEPT